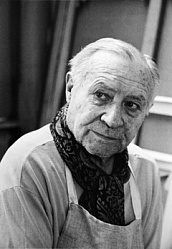 He was born in Belgium. In 1908, he graduated from the painting courses at the Brussels embroidery school and entered the local Academy of arts. In 1912, he continued his studies at the Paris School of fine arts. At the beginning of WWI, he volunteered for the front and was seriously wounded. He lived mainly in Paris, initially earning as a ceramist and newspaper proofreader. Having signed a contract with the famous art dealer D.-H. Kahnweiler, he managed to devote himself entirely to art from mid-1920s.

He had a strong color-symbolist manner in his early works,. However, his works went through a period of cubism later. In 1924, he found himself in the mainstream of surrealism, having met A.Breton after Masson's first personal exhibition. He developed cubist forms in a surreal manner, then, in 1926, he worked in the technique of "automatic painting", creating pictorial and graphic compositions (graphics always played a full-fledged parallel role in his works), where individual figures and symbols are increasingly were subjected to the spontaneous play of rhythms, colors and strokes.

In 1940, he moved to the United States, where his art directly boosted the formation of abstract expressionism, Masson himself was deeply impressed by the works of classical Chinese painting in the American collections. Returning to France (1945), he created impressionistic local landscapes.

His work of 1953-1959 attributed to the" Asian period " by their dominant echoes with the far Eastern ink painting.
Subscribe to Newsletter