Andy Warhol (born Andrew Warhola ) -an artist and a filmmaker, an iconic person in the history of pop art movement and contemporary art in general.

Warhol was born in Pittsburgh, Pennsylvania, in the family of Rysin immigrants from the country Mikova. He studied commercial art at Carnegie Mellon University. In 1949 he moved to New York and began a successful career in advertising and magazine illustrations. The success was brought him by advertising graphics, drawings of shoes for the I. Miller company.

In 1962, Warhol created a sensational series of canvases in screaming colors with images of cans of Coca-Cola and canned food, including the famous tomato soup "Campbell", which became the hallmark of the artist. Radical art critics immediately drew attention to them, saying that these works reveal the banality, emptiness and impersonality of Western culture of mass consumption. Subsequently, Warhol began to generate carried out in the same "acid" style images of the idols of modern society: Marilyn Monroe, Mick Jagger, Mao Zedong.

In 1963, Warhol opened a studio "Fabric" in downtown Manhattan. The studio produced up to 80 silkscreens per day and about a thousand per year. There the work on mass production of portraits of celebrities was adjusted. Scandalous reputation of Warhol contributed to higher prices for works from this series, which have become a real symbol of commercial pop art and American art culture of the XX century.

In the second half of the 1960s, Warhol began to show interest in the film industry, produced the rock band The Velvet Underground, was a conceptual designer of covers of music albums, for example, Sticky Fingers by The Rolling Stones.

A youth subculture of students and followers developed around Warhol, that often generated extremes of both - creativity and emotions. So, in 1968, the feminist Valerie Solanas shot at his teacher, wounding him hard.

Warhol was saved , but for a long time he remained an invalid, and in 1987 died from the effects of the injury. Today, the market value of Warhol paintings is often measured in tens of millions of dollars. His artwork " Silver Car Crash " (1963 ) was sold for 105.4 million dollars. 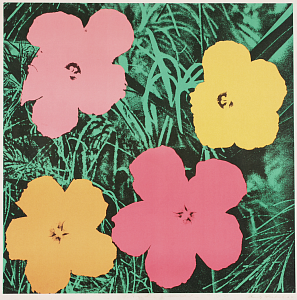