Egon Schiele was an Austrian painter and graphic artist, one of the brightest representatives of Austrian expressionism.
The artist lived only 28 years and painted for only 10 years, but he became one of the most striking and bold artistic figures of the 20th century.
This master for a very short life realized himself more accurately and deeper in his graphic works than in canvas.
Therefore, the ratio of his auction records is non-standard: the most expensive and large canvas of Schiele (109 × 139 cm), double-sided is «Einzelne Nasser / Monk I» ("Lonely house") was sold for $22.4 million at Christie's in 2006,
and water-color work "Self-portrait in a checked shirt" (45 × 30 cm) has reached $11.4 million at Sotheby's by the end of last year, that is twice higher that the estimate. 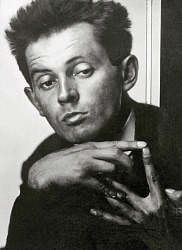 Egon Schiele was born in 1890 in Tulln an der Donau (Tulln on the Danube) in Austro-Hungarian Empire. He studied at the Kunstgewerbeschule ("School of Arts and Crafts") in Vienna. His first exhibition was held in 1908.

His works were exhibited among the works of outstanding artists such as Van Gogh, Edward Munch, Gustav Klimt and others. After Gustav Klimt’s death, his long-time mentor, Egon Schiele became a contender for the role of the largest Austrian artist. In subsequent years, his exhibitions are held, along with the famous works of not only the Art Nouveau style but also the immortal masterpieces of world art.

In 1915 he got married, and in 1918 Egon Schiele died of a raging influenza pandemic (Spanish flu), 3 days after his pregnant wife passed away.

Schiele painted landscapes, portraits, allegorical paintings, but most of all he liked to portray nudity.

Schiele lived in Vienna in the era of the birth of Freudianism, when society first began to talk about the importance of human sexuality.

The artist began to explore this topic, creating self-portraits. Self-portrait and nudity which were considered to be different genres at the time. Schiele decided to combine them. Painting and graphics of Egon Schiele, marked by nerve color contrasts, sophisticated-flexible design, and dramatic eroticism, is a mixture of Art Nouveau and Expressionism. The themes of Schiele's paintings are simple and understandable: longing, loneliness, fear, pain and a man alone with those feelings.

The artist gained special popularity after his death, thanks to the activities and exhibitions of the modernist connoisseur Rudolph Leopold, famous museum in the museum quarter was named after him. 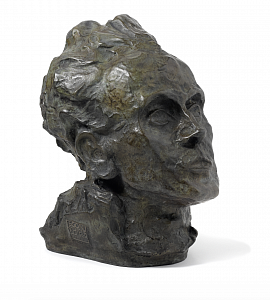 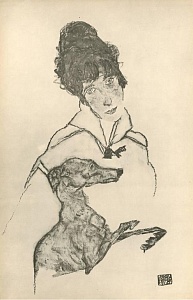 The woman with Greyhound Egon Schiele 1917

Original lithograph by the artist 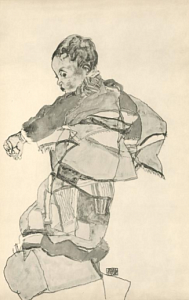 The portrait of a Child Egon Schiele 1917

Original lithograph by the artist 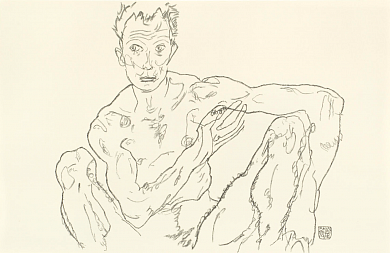