Commercial success came to Koons in 2007 when his giant metal installation "Hanging Heart" was sold at Sotheby's for $ 23.6 million.
The following year, a huge purple "Balloon Flower" went to Christie's for $ 25.8 million.
In 2013, "Balloon Dog (Orange )", sold at auction Christie's for $ 54.8 million, allowed him to become the most expensive living artist. 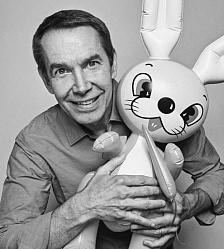 Jeff Koons was born in York, Pennsylvania. As a teenager, he worshipped Salvador Dali. Jeff Koons attended school at the Art Institute of Chicago and the Maryland College of Art.

After college, Koons worked as a broker on Wall Street. He got recognition in the 1980s. Later, he created a studio-Factory in New York's SoHo. He headed a staff of more than 30 employees, each of whom was responsible for certain aspects of his work, the same way as legendary Andy Warhol`s Factory.

Koons` art is classified as neo-pop art or post-pop art with elements of kitsch, art directions that emerged in the 1980s as a reaction to conceptualism and minimalism.

In the 1990s, Jeff Koons created a series of huge sculptures made of steel, imitating the elongated latex balloon toys. According to Koons, playing such balloons in his childhood made a huge impression on him, preserved to this day. In 1988, Koons created a gold-plated sculpture of Michael Jackson ("Michael Jackson and Bubbles") in full size which became a culmination of a series of sculptures "Banality". Three years later, it was sold at Sotheby's auction in New York for more than five million dollars.

Today Jeff Koons is the President of the Corporation Jeff Koons LLC with 135 employees, headquartered in New York City. In fact, it is a factory for the production of contemporary art, where Koons creates images and models on the computer, and the team implements them in the material.