Michail Grobman is a laureate of the Union of Artists of Israel Award (2000) and Dizengoff Prize (2001), Russian and then Israeli poet and artist One of the leaders, the ideologist and theorist of the Second Russian Avant-garde. He created more than 2000 paintings and graphic works and more than 700 poems.
An important element of his work is magical symbolism, filled with images that are based on biblical symbolism, the symbolism of Kabbalah, medieval Jewish art and magic.
Grobman's works are on display in the Tretyakov Gallery and the Pushkin Museum of Fine Arts (Moscow), the State Russian Museum (St. Petersburg), the Museum of Art in Tel Aviv, the Ludwig Museum in Cologne, the Pompidou Center (Paris), and others. 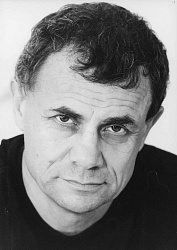 His work evolves continuously and even changes in the essence which makes it even more difficult to understand the logic of artistic evolution.

He is a poet and artist relevant in today’s world. He is known for his brutal artistic manner and sharpness of political statements both in Russia and in Israel.

Once, in the 1970s, he became famous as the author of the mysterious "actions in the desert", carried out by his group "Leviathan".

Today Grobman is firmly inscribed in the artistic life of Israel.

In the same year he was admitted to the Artists’ Union of the USSR.

He participated in many exhibitions of the so-called second Russian avant-garde in Russia, Europe, the United States.

Grobman from the very beginning declared himself as a Jewish artist.

An important element of his work is magical symbolism, filled with images, based on biblical symbols, the symbolism of Kabbalah, medieval Jewish art and magic.

Grobman was one of the founders of the artistic movement, known as the second Russian avant-garde.

In late 1970's Grobman’s diaries, poems, arguments about art and the artists of the second avant-garde were published in three issues of “Leviathan” newspaper.

The Moscow period of Grobman led to immigration. Many left-wing artists, who considered themselves as a part of the Western artistic world had to immigrate. Israel was often a transit point for them. But in the case of Michail Grobman, moving to Israel was a part of his artistic project and a key moment in his evolution, which began in Moscow. His major idea was his original strategy of creating "modern Jewish art". He considered Israel to be the most suitable arena for the large-scale implementation of these plans.