A prolific painter, draftsman, and etcher, Rembrandt (1606–1669) is usually regarded as the greatest artist of Holland’s “Golden Age.”
The most expensive work of Rembrandt ever sold at auction is "Portrait of a man with arms akimbo", which has been brought for £20.2 million at Christie's London in 2009. 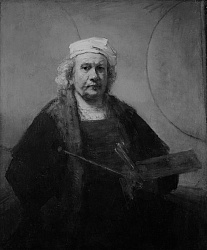 A prolific painter, draftsman, and etcher, Rembrandt (1606–1669)  is usually regarded as the greatest artist of Holland’s “Golden Age.” He worked first in his native Leiden and, from 1632 onward, in Amsterdam, where he had studied briefly (ca. 1624) with the influential history painter Pieter Lastman. Rembrandt never went abroad, but he voraciously surveyed the work of Northern artists who had lived in Italy, like Lastman, the Utrecht painter Gerrit van Honthorst (Rembrandt’s main link to Caravaggio), Anthony van Dyck, and—mostly through prints—Adam Elsheimer and Peter Paul Rubens. In the Leiden period, Rembrandt also responded strongly to earlier Netherlandish artists such as Lucas van Leyden (1489/94–1533). However, a crucial aspect of Rembrandt’s development was his intense study of people, objects, and their surroundings “from life,” as is obvious in paintings like his early self-portraits and the Saint Paul in Prison of 1627 (Stuttgart, Staatsgalerie). Even by Dutch standards, Rembrandt’s preoccupation with direct observation was exceptional and continued throughout his career. Despite the constant evolution of his style, Rembrandt’s compelling descriptions of light, space, atmosphere, modeling, texture, and human situations may be traced back even from his late works (such as The Jewish Bride, Amsterdam, Rijksmuseum) to the foundations of his Leiden years. It was also this program, in good part, that made Rembrandt a great teacher. His many pupils included Gerrit Dou, Govert Flinck, Ferdinand Bol, Nicolaes Maes, and Carel Fabritius.

Rembrandt started out in his hometown of Leiden, but soon moved to the fastgrowing metropolis of Amsterdam. There he painted narratives and portraits with plenty of action and strong contrasts of light and dark.

Rembrandt made many of his best works in the last years of his life, when his paintings became more serene in character. Movement was expressed mainly in the loose, rapidly applied brushstrokes. These paintings have an emotional charge and show great psychological insight.