Sonia Delaunay was an outstanding artist of the 20th century, who stood at the origins of one of the most interesting avant-garde art trends – Orphism.
Sonia Delaunay was the first living female artist to have a retrospective exhibition at the Louvre in 1964.
Prices for her early abstract works and canvas from the series "The Color rhythms" reach several hundred thousand dollars.
The most expensive painting of the artist is "The electric prisms" (1913) and it was sold for $ 1,567,500 at Christie's in 2017. 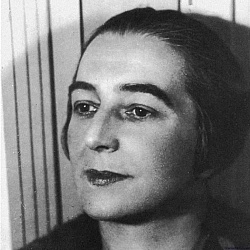 Sonia Delaunay was born in the small Jewish town of Hradyzk, Poltava province, Russian Empire. Her real name was Sarah Ilinitchna. Stern. At young age Sonia was sent to Saint Petersburg where she was cared for by her mother's brother, Henri Terk. Henri Turk was a successful and affluent lawyer in St. Petersburg and a shareholder of the Brockhaus and Efron joint stock company. In 1890 she was adopted by the Terks. She assumed the name Sonia Terk and received a privileged upbringing with the Terks. They spent their summers in Finland and traveled widely in Europe introducing Sonia to art museums and galleries. Even in her youth, Delaunay's teachers distinguished in her outstanding creative abilities. When she was 18, she was sent to art school in Germany where she attended the Academy of Fine Arts in Karlsruhe. She decided to move to Paris in 1905 after she red a book "Manet and His Circle". Delaunay was influenced by the circle of Fauves in Paris. She got married to a young talented artist Robert Delone in 1910. This couple became a true creative union; together they created a new direction in art - Orphism. The couple created the sets and costumes for Sergei Diaghilev's play "Cleopatra". Later, her husband helped her realize her fashion projects in Madrid, for Spanish aristocracy. In the 1920s, Sonia Delaunay became famous as a fashion designer, thanks to the accessories in the Orphism style.

While her husband Robert Delaunay created the famous simultaneous paintings, Sonia Delaunay embodied the same ideas in textiles and fashion. Modern western clothing designers show an unusual interest in the creative heritage of the famous artist. Sonia Delaunay was the first living female artist to have a retrospective exhibition at the Louvre in 1964. She became an officer of the French Legion of Honor in 1975. Sonia Delaunay died in 1979 in Paris. 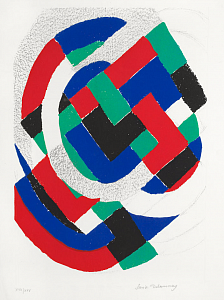