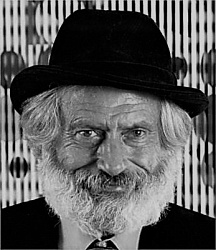 Yaacov Agam is an Israeli sculptor and experimental artist best known for his contributions to optical and kinetic art.
Yaacov Agam was born Yaakov Gibstein in Rishon LeZion, then Mandate Palestine. His father, Yehoshua Gibstein, was a rabbi and a kabbalist.

Agam trained at the Bezalel Academy of Art and Design in Jerusalem, before moving to Zürich, Switzerland in 1949, where he studied under Johannes Itten (1888–1967) at the Kunstgewerbe Schule, and was also influenced by the painter and sculptor Max Bill (1908–1994).

In 1951 Agam went to Paris, France, where he still lives. He has a daughter and two sons, one of whom is the photographer Ron Agam.

Agam's first solo exhibition was at the Galerie Craven, Paris, in 1953, and he exhibited three works at the 1954 Salon des Réalités Nouvelles. He established himself as one of the leading pioneers of kinetic art at the Le Mouvement exhibition at the Galerie Denise René, Paris, in 1955, alongside such artists as Jesús Rafael Soto, Carlos Cruz-Díez, Pol Bury, Alexander Calder and Jean Tinguely.

In 1964, Agam wrote his artistic credo, unchanged since then.


Awards:
1963 Prize "for creative search in art" at the Biennale in São Paulo 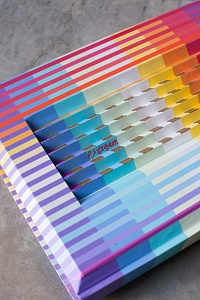