Yayoi Kusama creates soft sculptures, performances and installations with attributes of feminism, minimalism, surrealism, pop art and abstract expressionism.
She has represented Japan at the Venice Biennale in 1993, in 1998 and 1999, exhibited with Klas Oldenburg, Andy Warhol, Jasper Jones.
Kusama`s retrospective exhibitions were held in the USA and Japan.
The work "White No. 28" was sold for $ 7.1 million at Christie's auction on 12 Nov. 2014, what is a record for a living female artist. 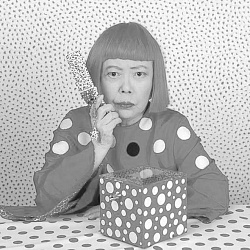 Yayoi Kusama was born in Matsumoto, Nagano. Since childhood she has been suffering from hallucinations and obsessive thoughts, often of a suicidal nature. Kusama studied for one year at the School of Arts and Crafts in Kyoto in 1948. She moved to New York City in 1957. Kusama was very ambitious, using her position as “not American woman” and her diagnosis of mental illness to create a unique vivid public image. During her stay in the USA, she gained quickly a reputation of the avant-garde movement` leader.

At the beginning of her career, Yayoi Kusama began covering surfaces - walls, floors, canvases, and later, different houshold objects and nude assistants - with polka dot pattern. Soon it became a trademark of her work. The vast fields of polka dots, or "networks of infinity," as she called them, were taken directly from her hallucinations.

In the 1960s, Kusama organized outlandish happenings in Central Park and the Brooklyn Bridge, often involving a nudity as a tool of artistic expression. She declared a protest against the Vietnam War, creating huge paintings known as "Endless Clean Paintings", consisted of repetitivepainting polka dots.

In the early 1960s Kusama began covering objects such as ladders, shoes and chairs with white phallic protrusions. Despite the micromanaged intricacy of the drawings, she turned them out fast and in bulk, establishing a rhythm of productivity which she still maintains.

Since 1963, Kusama has developed her series of «Mirror/Infinity rooms». In these complex infinity mirror installations, purpose-built rooms lined with mirrored glass contain scores of neon-colored balls, hanging at various heights above the viewer. Standing inside on a small platform, an observer sees light repeatedly reflected off the mirrored surfaces to create the illusion of a never-ending space.

During the following years, Kusama was enormously productive, but her art did not bring her money for living, and alongside to her health condition it became a reason for the return to Japan in 1973.

When she left New York, she was almost forgotten as an artist until the late 1980s/early 1990s, when the several retrospective exhibitions revived her international fame. Another turning point was her participation in the Venice Biennale in 1993, where she represented Japan.

Today she lives in her studio located near a psychiatric hospital in Tokyo, and continues to create her art works. 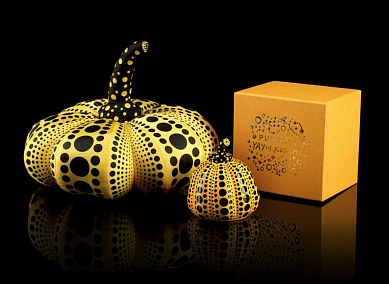 Multiple made of parachute nylon, painted cast resin housed in its original box