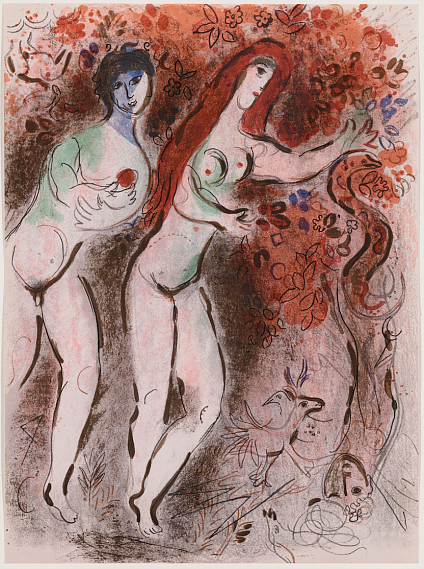 From the series "Le Bible II", released in Verve Vol. 1, No. 37-38. Printed in Mourlot Frères, Paris; published by Revue, Verve, Paris. Cramer, 42. Particularity of Chagall's art lies in the fact that instead of a serial narrative he shows to us individual episodes and characters - inhabitants of heaven and spiritual leaders of the people. They are all shown in close up, generally, as a rule, without certain place and time. The artist's works are easy to naive in execution, as if they were drawn by a child, but with what primordial power these lines and spots are organized. The biblical theme was the leitmotif of the entire work of Marc Chagall. The Bible came alive, touched by his brush, the ancient texts blazed with new fire of rosen sacrament. In Chagall's creations Paradise appears in its traditional understanding, as a state (place) of eternal perfect life (existence, reality) in bliss, in harmony with nature (universe), untouched by time and death. Adam and Eve are depicted as a whole, what literally reflects the text of the Bible. This work depicts the moment of the a Fall from Grace. A fall from grace is a general notion for all Abrahamic religions, representing violation by the first man of the will of God, that led to the fall of the man from the condition of utmost innocent bliss to the condition of sufferings and sinfulness. It was in the power of the man to decide what was good and ehat was bad, to choose between good and evil. Commitment of the sin of disobedience to God, as the man's volition, became the reason of the fall from grace.