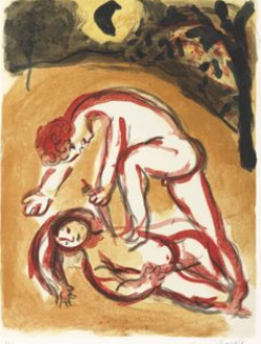 Abel was a shepherd and his brother Abel - a crop farmer. The conflict started from an offering the the God, made by both brothers (these are the first offerings mentioned in Bible). Abel presented some of the firstborn of his flock as an , and Cain - some of the land's produce. “And while they were in the field, Cain attacked his brother Abel and killed him.” In this moment of the Bible for the first time the topic of moral responsibility for one's actions is raised and also, for the first time, even before Cain committing a crime, only after his demonstration of envy, the word "sin" is mentioned.