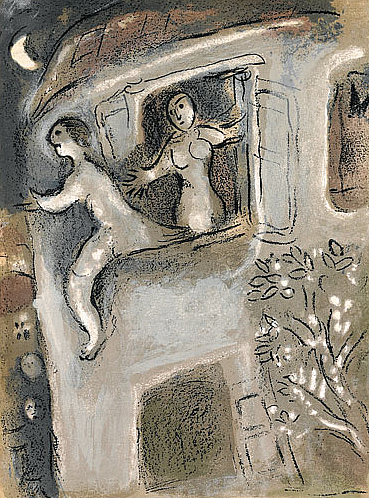 Michal (Hebrew: מיכל‎) was, according to the first Book of Samuel, the younger daughter of Saul, king of Israel, who loved and became the first wife of David, who later became king of Judah, and later still of the united Kingdom of Israel.
Hastily opening the windows, Michal helps her beloved David escape from the murderous hands of her father Saul. In this whimsical print, David leaps from the windowsill and appears to be frozen, mid-flight. Michal reaches out towards her lover in a moment of quiet longing as she watches her husband flee. Chagall utilizes rich midnight blues and soft blue-greys to create a truly magical piece that captures the love between husband and wife.
Created in 1960, this work was featured as part of a series of 24 color lithographs made by Marc Chagall to illustrate The Bible. Published by Verve, Paris and printed by Mourlot, Paris on Arches wove paper.
Популярные работы автора