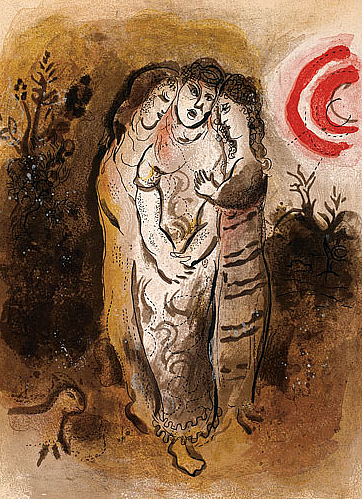 MOUSE OVER TO ZOOM
NAOMI AND HER DAUGHTERS-IN-LAW
Artist Marc Chagall
1960 г.
Original lithograph by the artist

Naomi (heb. ‏נעמי‏‎) is the wife of Elimelech and mother-in-law of Ruth, one of the central characters of the Book of Ruth.

Naomi was a Hebrew from the tribe of Judah, that lived in Moab with her husband and two sons. They moved to Moab due to a harsh famine in Bethlehem, where they had lived before. In the strange land Naomi lost her husband and sons. Naomi, having heard that "God hath looked after His people, to give to them bread" decided to return to her home Bethlehem. Forseeing hard times on native soil, Naomi appeals to her daughters-in-law to return to their home and try to create a new family. After much persuasion Orpah leaves and Ruth is unshakable.

Marc Chagall RUTH AND BOAZ 1960 Original lithograph by the artist 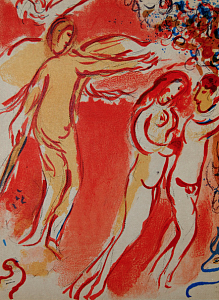