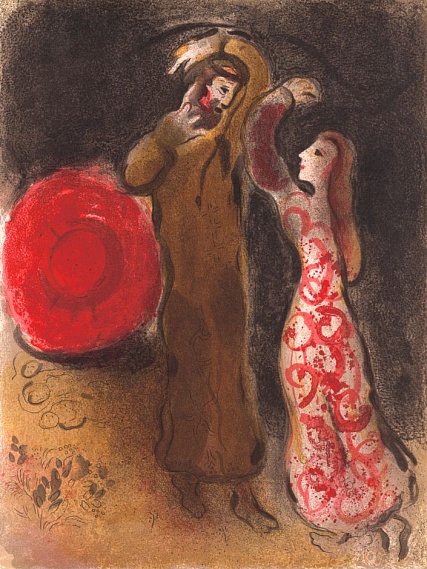 From the series "Le Bible II", released in Verve Vol. 1, No. 37-38. Printed in Mourlot Frères, Paris; published by Revue, Verve, Paris. Cramer, 42. Particularity of Chagall's art lies in the fact that instead of a serial narrative he shows to us individual episodes and characters - inhabitants of heaven and spiritual leaders of the people. They are all shown in close up, generally, as a rule, without certain place and time. The artist's works are easy to naive in execution, as if they were drawn by a child, but with what primordial power these lines and spots are organized. The biblical theme was the leitmotif of the entire work of Marc Chagall. The Bible came alive, touched by his brush, the ancient texts blazed with new fire of rosen sacrament. The whole world adores love stories and the story about Ruth and Boaz is just such a story about love and marriage that happened three thousand years ago, “in the days when the judges ruled”. Ruth (heb. ‏רות‏‎‎‎) is a famous biblical righteous, after which the book "Book of Ruth" was named. Her life corresponds to the latest years of troubled period of the judges. A Moabitess by birth, she took to her new relatives from the side of her husband (a Jew from Bethlehem), that after his death didn't want to part with her mother-in-law Naomi, took her religion and moved with her from Moab (where Naomi with her husband relocated due to a famine) to Bethlehem, where they started to live. Righteousness and beauty of young Ruth were the reason that she became wife of the noble Boaz and so great grandmother of King David.