«CHEMIAKIN AND VYSOTSKY. STORY OF THE LEGEND»

The price of admission: 330 rubles.

Altmans Gallery Moscow presents the exhibition in anticipation of the 75th anniversary of Mihail Chemiakin.

The exhibition “Story of the Legend. Chemiakin and Vysotsky“ opens simultaneously at Altmans Gallery, the gallery of the first names, in Moscow and at the center of artist Mihail Chemiakin in St.Petersburg on January 26, 2018. The exhibition is devoted to the creative tandem of two geniuses: the painter and the poet, and dedicated to the 80th anniversary of the birth of Vladimir Vysotsky.

The visitors of the exhibition at Altmans Gallery will be able to see the works from series “Carnivals of St.Petersburg“ – one of the main artistic themes of Mihail Chemiakin's work, till March 25, 2018. The exhibition will also present the works from series “Metaphysical compositions“. The visitors will see the unique collection of jewelry miniatures by Mihail Chemiakin, developed in collaboration with jewelry house SASONKO. Furthermore, as a part of the exhibition, the famous series of author's prints by Mihail Chemiakin to the legendary poems and songs of Vladimir Vysotsky will be available.

The central exhibits are the lithographs from series “Womb of Paris“ to which is bound a remarkable story: being in the artist's studio in Paris, Vysotsky saw these works, and the stories with the Paris butchers are inspired the poet so much that he phoned Mihail Chemiakin every half an hour, who was in New York city at that moment, to read the next successful stanza of the poem “Toshinoshi“ (“Carcasses porters”) being created. In this, the theme of “carcasses“ were familiar to Vysotsky and due to the Chemiakin's works, and to the tragic paintings of C.Soutine. He noted their tragic mood in poem “Toshinoshi“: “the essence of Soutine – save our carcasses!“ (there is a wordplay: family name “Soutine“ is formed of word “essence“).

And Paris is a landmark for both: Mihail Chemiakin is an iconic artist from St.Petersburg, and Vladimir Vysotsky is the legendary Moscow bard, met in Paris, thanks to Mikhail Baryshnikov, and always remained friends. Paris united them, became a point of attraction for both. This is where it all began, and there happened their last meeting.

Later Mihail Chemiakin talked about the meeting with Vladimir Vysotsky in Paris: “Our friendship was born really out of sudden, but it was clear that it would last forever. Our angels, creative and loving Light, Beauty and Justice, got to know each other, and the spirits of recklessness, riotous desperate fun and revelry, living in each of us, got to know each other, too. Volodya sometimes came to me straight from the airport to show me his new songs. We were united by the passionate desire to find the beauty and justice of existence, to excite this feeling inside people. Both were taken hits, and because of that we would especially like to break through and find the light of truth“.

From the first days of their friendship Chemiakin started a literal “enlightenment“ of his friend, becoming the Vysotsky's guide to the world of European culture. It was him who introduced Vysotsky to the unknown (in the Soviet Union) works of the masters of painting, sculpture and graphics, and Vysotsky “fell in love with the forceful world of paintings by Soutine, admired the harmony of forms in the sculptures of Henry Moore and Giacometti.“ Thus, two extraordinary people brought together a common understanding of art.

Vladimir Vysotsky was very fond of this friendship, he devoted his songs to Chemiakin, and he, in his turn, drew the illustrations to the Vladimir’s works. Vysotsky wrote to Chemiakin in December, 1979: “the end of “Wolfhunt “ is dedicated to Mihail Chemiakin. And I made up this song for him. The “Domes” – this is too, I owe it to him. It is for him. And the most serious of my songs “I was weak and vulnerable!” Misha! You gave me this idea. Love you. Because I love true friends. Misha! I would like to live here because of the fact that you're here!“

Their last meeting took place in Paris three weeks before Vysotsky's death – then the artist and the poet met for the last time. Vladimir wrote a farewell poem and hid it between the drawings of Chemiakin, who discovered the poetry only after the friend's death. The poet even described why died. However, Chemiakin notices that the death of the bard had not only mystical, but also prosaic reasons.

Time has shown that for them, friendship has not ended with the Vysotsky's death – no one of the former friends has done so much good for the memory of Vladimir Vysotsky, as Chemiakin. With the participation of Mihail Chemiakin, album of Vladimir Vysotsky ROBIN GOOD – ”ROBIN HOOD” – has been released. Chemiakin wrote book ”The two destinies” about their friendship. The monument to Vysotsky, made by Mihail Chemiakin, was installed in Samara. 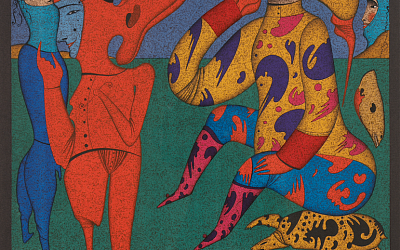 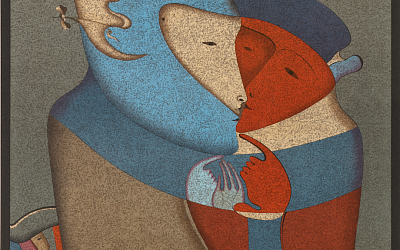 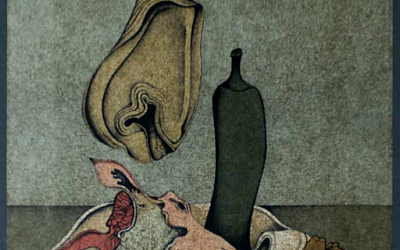 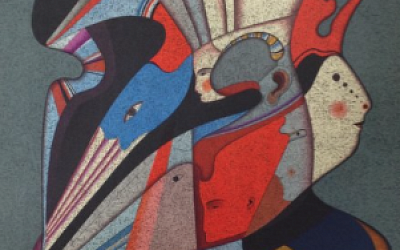 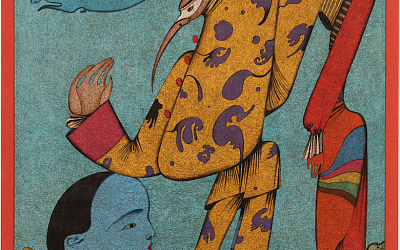