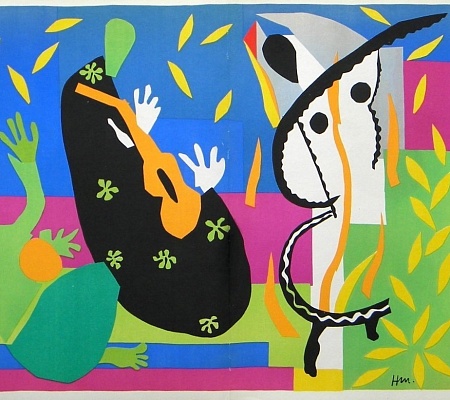 The price of admission: 300 RUB

"Colors in painting only have power and expressiveness when they are used in their purest form."
Henri Matisse

In the fall of 2019, Altmans Gallery will present an exhibition dedicated to the 150th anniversary of Henri Matisse's Passion for Color, the outstanding French artist and leader of the Fauvism (from Fr. fauve - wild) movement. The new Altmans Gallery project is really unique: "A Passion for Color" will be the only anniversary exhibition of Henri Matisse not only in Russia but in the whole Eastern Europe. A Passion for Color will be the first mono-exhibition of lithographs in Moscow and present rare works by the artist that are little known to the wide public.

The exhibition will highlight the main milestones in Matisse's work during his heyday: from iconic works, including the "Dance" created especially for the mansion of collector S.I. Schukin (at the exhibition "Passion for Color" visitors will get acquainted with the version of "Dance" in 1938, not presented before), to bold coloristic and rhythmic experiments, which were embodied in the series "Jazz". The main objective of the exhibition is to show the master's work with color in the later period of his work. Thus, the central works in the exhibition will be lithographs of applications created by the artist in the period from 1938 to 1954.

After a serious operation in 1941, Matisse was no longer able to create paintings and began to work in a technique that he had turned to only rarely until then - the technique of decoupage (from fr. découper - cut out). Matisse painted the sheets of paper with gouache and then cut out the shapes, which he placed on paper according to his artistic idea. Thus, plastic expression and expression of color, which became defining in the entire work of Matisse, embodied in a new form.

At the heart of the exhibition are 31 lithographs from the art collections "Verve" of different years (including the almanac, issued after the death of the artist and entirely devoted to the work of Matisse). The exhibition will also be supplemented by two earlier works from the Ten Dancers series.

All works from the exhibition will be available for purchase at the gallery.

Within the framework of the exhibition an educational program will take place: master-classes and lectures on Matisse's work and fate, new directions in the art of the turn of the XIX-XX centuries, and artistic life of that time in general.

In mid-November visitors will be able to visit a special screening of a documentary by the BBC about the work of Henri Matisse with comments by Natalia Semenova - biographer of Sergei Shchukin and the Morozov brothers, doctor of art history, translator of the book "Henri Matisse" from the "ZHZL" series, scientific consultant of the exhibition "Shchukin. Collection Biography" exhibition at the Pushkin State Museum of Fine Arts.


Georgy Altman, founder and co-owner of Altmans Gallery:
"I personally love Henri Matisse's black and white works, and our exhibition will feature them - beautiful images of ballerinas from the "Ten Dancers" series. Also in our collection is a reworking of the world-famous "Dance," made by the artist much later than the original work. I think all of Matisse's work is one continuous dance - a dance of figures, a dance of light, a dance of color. In addition, with this work - a lithographic reproduction of "The Dance" - we wanted to emphasize the artist's connection to Russia, because, as we all know, the famous painting was commissioned by the Moscow collector Sergey Shchukin. Therefore the concept of the exhibition is based not only on color, but also on rhythm and motion, so familiar to Moscow - a bright, energetic city, which itself seems to dance. Matisse works full of color and life are in this sense a perfect match for our capital.


Tickets for the exhibition can be purchased at Altmans Gallery and on Parter.ru
Subscribe to Newsletter