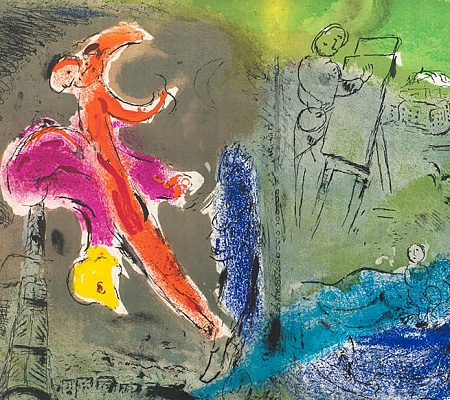 The Altmans Gallery, which recently celebrated its five-year anniversary, is opening an exhibition of selected works by Pablo Picasso, Marc Chagall, and Zurab Tsereteli. The gallery, which has been working with a number of prominent masters all these years, has collected works of the classics in this exhibition, addressing the very origins of the modern artistic tradition - the image of the city, which is almost synonymous with modernism - to Paris.

It is this European capital with its repeatedly mythologized landscape that has played a key role in the biographies of the three authors represented in this exhibition. It is here that the brilliant talent of Pablo Picasso emerged and blossomed, at the beginning of the last century predetermining and setting the direction of artistic quests of subsequent generations. Characteristically and importantly, the most representative collection of his works is kept in the local Pablo Picasso Museum. For Marc Chagall, Paris became a second home. Here in the famous "Beehive" he was formed as an artist, getting acquainted with the color of the local intelligentsia and bohemia in the early 1910s, and returned here later, in the postwar period, both in his works and in his texts, openly comparing its image with his native Vitebsk. This place - a true Mecca for artists and writers, poets and actors - played no less important a role in the biography of Zurab Tsereteli. He has been working here in his studio for twenty years, continuing and developing the powerful plastic traditions established by his influential predecessors. It was in Paris - in 1964 - that he met Picasso and Chagall, which had a significant influence on shaping his creative style. Later awarded the title of Chevalier de l'Ordre de la Legion d'Honneur de France, Tsereteli created the Monument to John Paul II, which since 2014 decorates the square next to the Notre Dame de Paris.

The works collected in the gallery's two halls refer not so much directly as rhetorically, allegorically, to the intense, intense atmosphere of creation that we associate with Paris today. Its alleys and passages have become the organizing background, the common myth that unites the three authors of this exhibition. While remaining something different for each of them, it serves as a link between eras, the outlines of which are still visible in the present day.

"For five years our gallery has been developing the public's interest in circulation art. The gallery's collection is mainly made up of Parisian artists - Picasso, Chagall, Matisse, Degas and others. We decided to invite Zurab Tsereteli to take part in the exhibition and present his graphic works. Tsereteli as a sculptor or painter is better known to the public than as a graphic artist, but this part of his work is no less interesting and important in the context of his work. The unifying semantic idea of the exhibition is Paris, and this is not accidental, because the city and the artists influenced each other significantly, and we want to show how this is reflected in their work. We specialize in the works of the first names, and we are sure we made the right choice by dedicating the gallery's anniversary exhibition to the works of these three iconic people in the art world," - said Yegor Altman, the founder and owner of the gallery, about the exhibition.

"The exhibition "Paris for Your Own" gives a chance to view this beautiful city through the eyes of artists for whom it has become a place of creative search and a source of inspiration. I would like to note that it is a great honor for us to exhibit Zurab Konstantinovich's works next to those of such masters as Marc Chagall and Pablo Picasso. I am very glad that this particular project was timed to coincide with the anniversary of the Altmans Gallery," says Vasily Tsereteli, Executive Director of the MMOMA.