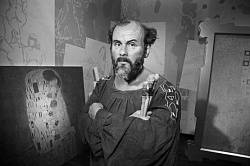 Gustav Klimt is one of the most famous Austrian artists, the founder of Art Nouveau in the Austrian painting.

The first notable works of the master were rather decorative. At the same time, his favorite theme throughout the creative path remained naked female nature. Klimt was able to portray every woman sexually and sensually, but at the same time to avoid vulgarity.

So-called "golden" period of his works started in the late 90s of the XIX century. The works of this period made by using real gold leaves have become the most famous and expensive works of the master.

Since 1910, Klimt began to move away from the overloaded decorative style. Even in the second portrait of Adele Bloch-Bauer, created in 1912, he did not use extravagant gold; by now, it was important for him to color. However, Klimt did not have enough time to develop a new style — WWI broke out, and he died on February 6, 1918.