The most expensive painting by Matisse as of 2014 - "Daffodils and tablecloth in blue and pink colors" was part of the collection of Yves Saint Laurent, and after his death, was sold at Christie's auction for 35.9 million dollars. 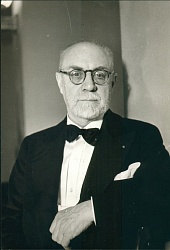 Henri Matisse was born in Le Kato (Picardy). He studied in Paris at the Julian Academy, then at the School of Decorative Arts and the School of Fine Arts.

In 1905-1907 Matisse became the leader of a new artistic direction - Fauvism. However, Fauvism was often accompanied by acute social criticism - so "Blue Nude" of Matisse was burned at the International Exhibition of Contemporary Art in Chicago in 1913.

In the period 1907-1911's friends wizard financed Matisse Academy, where he could train young artists.

In the second half of the 1900s, the artist found his own style - sleek drawing, a contrast combination of a few color zones (panel "Dance" and "Music" for the mansion of Shchukin in Moscow) or drawing, rich in shades of primary colors, translucent and not concealing texture of the canvas ( "Artist's Workshop"). In the works of Matisse of the second half of 10s the impact of Cubism is noticeable ("Music Lesson"), and works of the 20s, on the other hand, are notable for coloristic variety, softness of the letter (Series "Odalisque"). In 30-40-ies the artist combined decorativeness of Fauvism with analytically precise construction of the composition (frieze "Dance" at the Museum of Barnes). In the 40s, the artist often resorted to the technique of applications from colored paper (series "Jazz"). Since the beginning of 1900, and most often in the 20-30-ies Matisse turned to sculpture (relief of "Nude female figure seen from behind," 1930).

The most expensive painting by Matisse as of 2014 - "Daffodils and tablecloth in blue and pink colors" was part of the collection of Yves Saint Laurent, and after his death, was sold at Christie's auction for 35.9 million dollars. 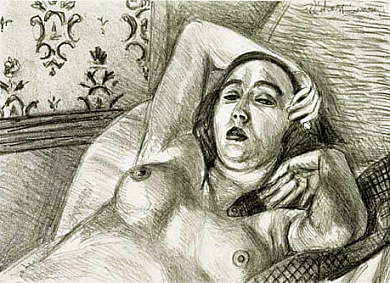 REST OF THE MODEL Henri Matisse 1922 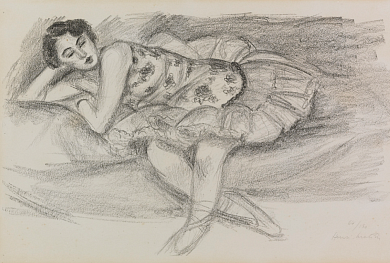 Original lithograph by the artist
,signed and numbered 78/130 in pencil by H.Matisse