Moïse Kisling is a French artist of a Polish origin, a member of the Paris school.
Today, Kisling is in demand by collectors and the public,
his works often appear in the catalogs of the most representative auction houses and exhibitions of the largest museums in the world.
The record price for his work was set on June 19, 1989 during the auction of the French auction house:
for still life "Vase of flowers" (1930) whichi was sold for $584 150. 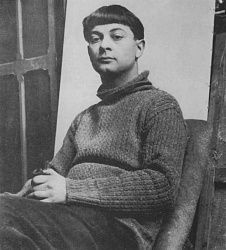 Moïse Kisling was born in Krakow where he attended an art school, but he moved to Paris in 1910. Since the beginning of World War I, he joined the French Foreign Legion and was seriously wounded in a battle in 1915.


The common studio and friendship with Modigliani, who has a clear individual vision of art, helped Kisling to develop his own artistic language — lyrical expressionism, much more realistic than the Modigliani's style, sometimes even closer to the salon style and exaggerated naturalism.


During World War II and the occupation of France, he moved to New York.


As it was of Modigliani's works, nudes and portraits of Kisling dominated by elongated body lines and proportions on a simplified to the limit background. His works have no plot, there is no action, everyone and everything — man and nature — are immersed inside. Especially highlighted people's faces — with a weak-willed expression and a pensive glance (inward), and huge, wide-opened languishing eyes. The energy of his paintings can be given by only the color-bright, contrasting, vibrant and shining colors of his works which are not mixed, but only are turned by a haze along the lines of the contour.