Today the works of Vasarely are exhibited in the Vasarely Foundation in Aix-en-Provence, the Center for Contemporary Art named after A.I. Georges Pompidou in Paris,
as well as in the homeland of the artist - Pec and Budapest. The art work of Vasarely “Space” is the only painting in the world of art that had been in space.
The work was on the board of the spacecraft “Soyuz T-6” and on the space station “Salyut 7” in 1982.
By this moment, picture “Zebras” is considered as the most expensive as it was sold at Christie’s for £485,000 on March, 7, 2017. 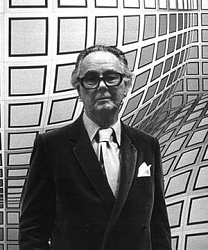 Victor Vasarely was born in Pecs, Hungary, in the family of a well-to-do peasant farmer. From 1925 he studied medicine in Budapest. Deciding to become an artist, in 1927-1929, he studied in local private art academies, working in parallel as a commercial designer. In 1930 he left for Paris, where he opened an advertising graphics bureau.

He transferred successfully his experience of the poster artist to his early black-and-white graphics, based on the optical effects of "flowing" of abstract forms and patterns into curly ones and vice versa. At the same time, Vasarely actively engaged in painting of the same kind - when natural motifs increasingly turned into fragments of a total ornament, destroying the traditional perception of the visual balance of the foreground and background.

Unlike representatives of Constructivism, Vasarely was interested not as much in the geometric structure of the work, as in the visual field between the work and the eye. This field became for the artist a truly game, generating infinite spatial visual "deceits". In the 1950s, Vasarely began creating real three-dimensional works, creating relief colored compositions, as well as sculptures that looked like transparent illuminated boxes with glass plates inside. In any case, mostly, he was interested in purely illusory plasticity and optical "third world".

Based on the tradition of geometric abstraction forms, Vasarely built and patented a universal system of "plastic alphabet" in order to disseminate and replicate “new art”. Since that time, all his paintings and graphics turned to "plastic units" ("unites plastiques"), which could already be varied in different ways without the author's participation.

The images of the master were not only embodied in the form of architectural constructions and monumental compositions (the composition of Paravista on the floor of the Faculty of Natural Sciences in Paris, 1967), not only actively influenced fashion and design in general, but also were implemented in the form of commercial products (decorative objects and toys for children).

In 1976, in Aix-en-Provence, in a building designed by Vasarely, there was opened a Foundation for his name. Since 1982, the artist's museum exists in his hometown. Vasarely` art marked the beginning of the art direction "op-art", and had a huge impact on graphic design and poster art of the second half of the XX century.